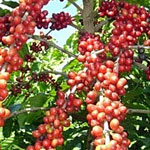 Arabica, a species originated in Ethiopia, is rated as The Best Coffee Flavor. Its cultivars are grown in several areas worldwide. Read on!

With the scientific name of Coffea Arabica, the species is also known as the “coffee shrub of Arabia”, or “mountain coffee”, and is believed to be the first species of coffee to have been cultivated.

Native to the mountains of Yemen and the Southwestern uplands of Ethiopia, Arabica is now rare in the latter and many cultures appear to be a blend of native and planted plants with some intact-plant areas in Sudan and Kenya. However, it is unclear whether these are native or just a naturalized event.

The species is broadly adapted in regions outside its native land, in many parts of Africa, Latin America, Southeast Asia, China, and some islands in the Caribbean and Pacific.

Almost all of the coffee that has been cultivated over the last few centuries began with just some wild Ethiopian plants that have been naturally mutated and selected to the Arabica Coffee we highly enjoy today.

This variety takes about seven years to fully mature and has its best production at 1.0–1.5 meters (about 40–59 inches) of rain volume, distributed along the whole year. The best altitudes are between 1,300 and 1,500 m, but plantations can go as low as sea level, up to 2,800 m.

Most commercial cultivars grow up to about 5m and are often trimmed as low as 2 m to ease the harvesting process.

About three years after planting, Arabica produces small, white, highly fragrant flowers that resemble the smell of jasmine. The more and healthier flowers, the more berries are produced.

This phenomenon is not exactly a blessing since it can lead to inferior cherry size, harvest and even damage the yield of the following years, since plants tend to favors seed production over their individual health (preservation of species, remember?).
On well-kept plantations, over flowering is prevented by pruning the plants. The flowers only endure a few days, leaving dark-green leaves behind and a cherry “tiny ball bullet”. These “bullets” evolve to small dark green berries,  then begin to ripen to yellow and red. When fully grown with a dark red color and about a 1 cm oblong format, they are ready for harvesting.

Among other factors, too early or too late crops result in inferior quality beverages. Many farmers apply a hand-picking method to ensure better-selected harvests.

The coffee plants are difficult to grow and, depending on individual properties and weather, each can yield from 0.5 to 5.0 kg of dried beans. 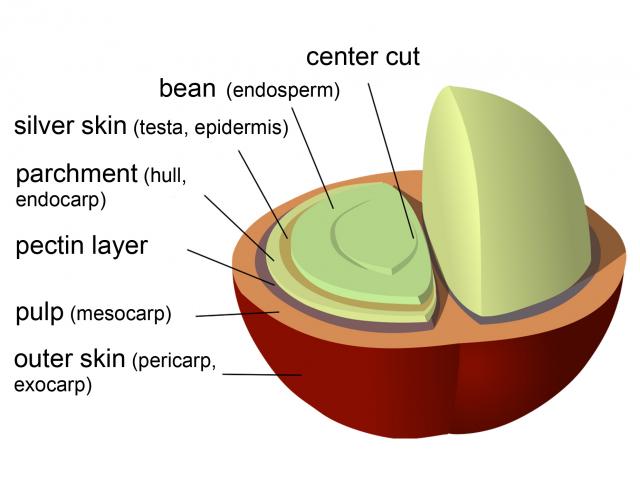 The coffee beans are actually two seeds within the fruit. These grains are covered with two membranes:

Farmers plant and harvest their coffee all year around on Java Island. In parts of Brazil, however, coffee plants have a seasonal cycle and are harvested only in winter.

Gourmet coffees are nearly solely high-quality variations of Arabica coffee, and Brazilian coffee is among the best, if not the best Arabica coffee you can get for your cuppa Joe.