One other great process is coffee Moka pot brewing. This type of coffee pot was invented by the Italians to revolutionize coffee drinking. Check it out. 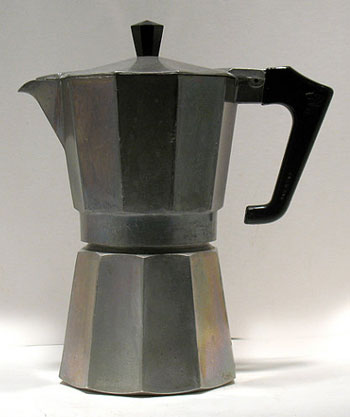 “Macchinetta” (small machine) is the popular name for the  Moka pot. The Italian invention was created by Luigi De Ponti for  Alfonso Bialetti, in 1933.

This pot brewing device is used widely in Europe and South America.

It is a universal example of a great aluminum industrial design shown throughout the world in many museums and fairs.

To brew with this device you need to place the coffee pot over a heat source of any kind that is able to achieve an ideal water boiling point.

Some Moka coffee brewing devices work the same way as the traditional version aided by a combined valve to control steam, similar to a pressure cooker.

This diminishes vapor leakage and water starts to boil much faster, rising through the ground coffee in less time.

Since steaming occurs at a higher pressure and heat, the resulting coffee is more similar to espresso with crema.

Another modified Moka Pot Brewing method allows milk to be mixed with the coffee during the process.

Besides Bialetti, many companies manufacture their own coffee Moka pots. Those include:

On the second half of the 20th century, Moka brew device spread all over South Europe where manufacturers copied the original design and made it popular.

To brew with a Moka Pot, all you need is one of the above-mentioned coffee brewers.

Even though the bottom chamber reaches higher temperatures, the boiling water that passes through the funnel is no higher than about 90 to 95 degrees celsius preventing, this way, the coffee from burning. Just remember to turn the heat off at the correct point.

Find out about the Best Moka Pot in our opinion.

Moka pots come in many sizes.

This device is great for brewing Brazilian coffee.