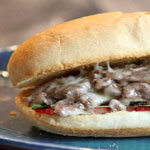 In Brazil, we have a very traditional sandwich called Bauru, named after the city with the same name in the state of São Paulo. The delicacy is very similar to the American traditional sandwich from Philadelphia and I could not resist trying an experiment between the two recipes. I added a touch of exotic flavoring with Brazilian coffee

Since I like to over spice it, I eat this sandwich with a refreshing Tropical Brazilian Latte on the side!

I hope you enjoy it as much as I do!

“Bauru is a popular Brazilian sandwich. The traditional recipe calls for cheese (usually mozzarella) melted in a bain-marie, slices of roast beef, tomato and pickled cucumber in a French bun with the crumb (the soft inner part) removed.

The Bauru has a fairly well-documented history. In 1934, a student, (…) Casemiro Pinto Neto] (nicknamed Bauru), entered Ponto Chic, a traditional eatery, and student hangout, and asked the cook to prepare a sandwich from his specifications. “Bauru’s Sandwich” was an immediate hit, and eventually became the best-selling dish at the place.“

“A cheesesteak, also known as a Philadelphia cheesesteak, Philly cheesesteak, cheesesteak sandwich, cheese steak, or steak and cheese, is a sandwich made from thinly sliced pieces of beefsteak and melted cheese in a long hoagie roll. A popular regional fast food, it has its roots in Philadelphia, Pennsylvania, United States.”