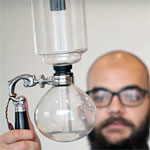 Have you seen a Coffee Vacuum Brewer? Want to learn about it? It’s a system based on simple interesting physics principles. Check it out!

Some people think that this brewer is too complex and, on a day to day basis, it actually is, despite the fact that it works using a very simple physics principle called Thermodynamics.

Invented by Loeff of Berlin during the 1830’s, these devices, prized for manufacturing a transparent coffee brew,  were used for over a century around the world.

Also known as Vac pot, or Siphon Coffee Maker, The Napier Vacuum Machine, designed in 1840, was an early standard of the system commonly recognized today.

I have tried Brazilian coffee with this brewing machine and the taste was always wonderful.

The Principle of  Vacuum Coffee Brewers

A vacuum coffee brewer works as a siphon. Through expansion and contraction, boiling water moves up inside a tube (C) to the previously ground coffee chamber (D) and brews it. Then, when the heat is turned off, the liquid brewed coffee flows down back to its original chamber.

On August 27, 1930, Inez H. Pierce of Chicago, Illinois filed the patent for the primary vacuum coffee maker that actually machine-controlled the vacuum brewing method, whereas eliminating the requirement for a stove top burner or liquid fuels.

It attached an electrically heated source stove to the original vacuum brewer system. The idea was to complement the system with an automated device that would control and turn off the heat while making the structure able to be carried around more easily.

The above Coffee Vacuum Brewer design was later enhanced by appliance engineers of Sunbeam in the late 30’s. by changing the heating chamber that was hard to clean and improving better filtering methods.

This video from Elemental Coffee is really great. It shows how to handle the vacuum brewing system to perfection.

Too bad that I don’t see Brazilian coffee sold on their website. It would be wonderful to test it with a Coffee Vacuum Brewer.

The best options for this type of coffee brewer are in this article.

2 thoughts on “What is a Coffee Vacuum Brewer?”