Are Krups Filter Coffee Machines for You? They are among the best in the world for Brazilian grounds. They, like us, are passionate about coffee perfection. 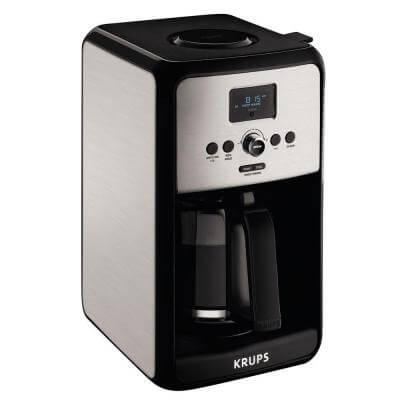 Most of them use the most common pour-over, process to make your cuppa.

After being heated in a separate chamber, water is channeled to pour over the grounds that brew and drip thru the filter into the pot.

This process is also called Filtered Coffee, or Drip Brewing.

The greatest thing is that drip brewing is the most common method used in Brazil. Unfortunately, not automatically, since most people still do it manually as in the old days.

You may check this in this recipe article

Nevertheless, I have tried some Krups Filter Coffee Machines while in the USA and at some friends’ here in Brazil and found out that

Brazilian mojo tastes great when brewed with these machines.

Once again, as I stated in previous articles, don’t just take my word for it; TRY IT!

It’s always best to base your opinion on your experience. Other people’s opinion can be a great guide, just that. The rest is with you.

The bold German factory specializes in kitchen aids; among them the popular and renowned Krups Filter Coffee Machines.

Scales were the first bread and butter of the company for over 110 years, until 1956

In the following decades, the North Rhine-Westphalia company, created and directed by Robert Krups widened its array of products.

The first coffee-related machine, manufactured by Krups, was  ONKO’s 1961 release that stayed available, with some modifications, until 2014

In 1983, Krups released its first machine.

By the year 1990, the company had expanded to 3000 employees with four factories in Europe.

Their coffee machines were then responsible for the highest revenue of the company.

A joint venture between giant Nestlé and Krups was settled in 1991. Its purpose is the development and production of the Nespresso Project, a brand of espresso machines and pods to widen the consumption of higher quality beverages.

Today, Krups manufactures a very wide range of products like:

We have reviewed the Krups EC311 Maker.

Please leave a comment about the Krups Filter Coffee Machines.

4 thoughts on “Are Krups Filter Coffee Machines for You”