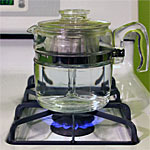 Learn to make good coffee with a percolator. The 19th-century device is still used by many in their outdoor wild ventures. Makes great mojo! 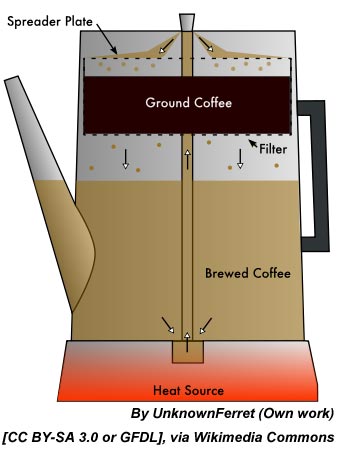 Going outdoors can be tricky. Most of the times you don’t have access to electricity.

My personal choice for those situations, a coffee percolator is a vessel used for brewing by steadily cycling the nearly boiling water through grounds using convection.

The pot has a bottom water chamber which sits above a heat source.

A vertical pipe leads from this chamber to another one at the top.

Just below that, a third (perforated) container is used to place ground coffee.

Desired amounts of water and powder are placed in their own respective chambers.

The heat boils the water and makes it travel up the tube.

Reaching the top, the water flows down into the perforations reaching the coffee grounds.

It seeps through carrying coffee extracts to the bottom of the coffee chamber.

The brewed coffee, then, drops on top of the colder portion the water surface, in the lower chamber.

More water is forced up the tube in a continuous cycle.

When the system water approaches boiling point with spurting sound jerks, the coffee is ready to be served.

Manual percolators require attention not to let the coffee boil in order to avoid a bitter taste.

Some percolators have their own electric devices attached at the bottom. Usually, they are able to control temperature.

Non-pressure percolators may also be used with paper filters.

The word “percolate” means to cause a solvent to pass through a permeable substance especially obtain its extracts.

Percolators used to be very popular until de 1970’s when automated pour over machines came into the scene.

Coffee with a Percolator: CONS and PROS

over extraction – due to higher temperatures over-circulating brewed coffee through the beans.

less flavor – due to percolation removing some compounds in the beans. This causes a pleasant smell at brewing, though.

Enthusiasts say that the percolator’s hotter and more ‘robust’ coffee compensate the potential pitfalls and also that careful control can diminish and even avoid them. They also dismiss the need for electricity.

ROOTS of Making Coffee with a Percolator

The system was invented between 1810 and 1824 by Count Rumford after his pioneering work with the Bavarian Army improving diet and clothing.

Later a modern type, improved by Parisian tinsmith Laurens, with improvement in rising water capabilities, made it possible to use it with a kitchen stove in 1819

In 1889, a final patent of the system that we know today was issued for Hanson Goodrich, a farmer from Illinois.

I have seen one of these once, a long time ago while visiting one of my grandfather’s old friends. I can only tell you that Brazilian coffee tastes great with it, but I did feel a little loss in boldness.

The most used and best seller percolator is the

Please leave a comment about Coffee with a Percolator.

2 thoughts on “Make Good Coffee with a Percolator”