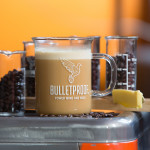 is a blend, of coffee and dietary greases, that promises to boost up your system for performance and fat loss. Read on! The coffee drink consists of “upgraded” black coffee combined with grass-fed butter and “Brain Octane Oil”, an 8-carbon fraction of medium-chain triglyceride oil. Dave Asprey created the formula and first posted to his blog in 2009. Asprey claims that the drink boosts cognitive achievement and weight loss, and it has been used by sportspeople and Silicon Valley businesspeople.

idea after visiting Tibet and tasting tea drinks with yak-butter. Back to the United States, he experimented with a few options of dietary greases and coffee to publish his final preparation for a power coffee drink on the internet right away.

In 2014, television featured the product on shows such as The Tonight Show with Jimmy Fallon, Today, and Good Morning America Today and had a following of over three million users.

By 2015, Bulletproof Coffee was operating with 20 workers and had above six million single visitors to the product’s website. Bulletproof Cafe opened in Los Angeles during that same year.

Coffee beverages made with different forms of fat have been in use for centuries by people from Singapore, Himalaya, Ethiopia, Nepal, and Vietnam.

The Gurage people, in Ethiopia, traditionally add butter, honey, and salt to coffee.

In Singapore and Vietnam, people usually sauteé chon coffee beans with butter prior to roasting.

Tea with butter is a favorite drink in Tibet, where its high calorific intake provides energy to those performing manual work in a harsh setting.

In my country, it is very common for people to have Brazilian coffee with bread and butter for breakfast. Not a drink mix, this combination, somewhat, calls for the same principle.

brewed coffee with “upgraded beans” which Asprey claims are low in mycotoxins.

Blend them together for about  20–30 seconds until frothy.

David claims that when used in combination with other “health hacks,” the coffee has helped to boost his IQ by more than 20 points. His company claims that Bulletproof Coffee can trigger weight loss through ketosis, besides, to aiding cognition.

Dietitians have not pointed out any scientific basis for these allegations. Most experts say that any feeling of vigilance from Bulletproof Coffee is merely a “coffee buzz.” Some naturopaths like Dr. Frank Lipman and Dr. Andrew Weil understand that buttered coffee, combined with a well-balanced diet, could be beneficial to your health and provide a bit more energy on your daily mojo.

Asprey declares that most coffee beans contain high levels of mycotoxins and that this removes your intellectual edge and makes you weaker. He markets a brand of “upgraded” beans which he advertises as having undergone a secret, proprietary process to decrease mycotoxin levels.

Physician David Bach has pointed out that producers are already good at removing mycotoxins from their coffee and that there is no sign to support Asprey’s allegation that mycotoxins make people slow.

I am very excited about the association between coffee and grease. It seems to me that this mixture, which is already being used by many functional nutritionists and dietitians works quite well in association with balanced diets. Also just for an energetic and mind boost

But with Bullet Proof coffee, even though the principle appears to be right and the same, I get uncomfortable with all the secrecy suggestion in the production process. I, myself, prefer to exactly know what I’m consuming, even if it is the case of choosing something bad to eat.

I think some investigation still must be carried to prove that this coffee is better than any well-cared production. On the other hand, not much harm can be done while experimenting it. Worst-case scenario, it’s just coffee as any other good quality coffee.

In fact, experimenting being my motto, I suggest you try this out and be the judge of it.

Furthermore, compare it to the good old (not so much) Brazilian coffee with coconut oil and butter (or ghee), as you can see in this recipe.

If you are organic conscious, use organic. If you don’t bother much about it, use good origin coffee, and you will most likely be making a great quality drink. Nevertheless, it is always possible to use quality common coffee in your formula and, have positive results.

Decide for yourself. Whatever works better for you is the best choice.